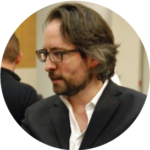 Pete Crosby has been growing SaaS revenue teams for almost 20 years. He is currently CRO at Ometria, who Deloitte placed in the Top 10 growth businesses in the UK with revenue acceleration above 3000%. Ometria raised a $21m Series B in August 2019.

Prior to Ometria, Pete ran revenues at Viadeo from Series A to IPO, and more recently took Triptease from $2m to $10m and a successful Series B in just 18 months. Pete is one of the 3 founding members of the London Revenue Collective, a private members club for senior revenue leaders which now has more than 100 paying members.

He is also a non-exec sitting on the board of Kluster, a pre-Series A sales analytics start-up. Pete has run teams all over the world, including China, Singapore, Latin America, United States, Africa, Russia, and all over Europe.